With the prices of fuel shooting up faster than a "missile launch" in Ghana, you might wan't to keep an eye on this post if you have any intentions of combining fuel efficiency with luxury in your decision to purchase a vehicle for private use in this beautiful country of ours.

Fuel Efficiency is a term used to describe the relation between the distance covered and the fuel consumed by a vehicle in covering that particular distance. Technology is gradually amending this definition anyway as manufacturers are improving vehicle features to improve fuel efficiency. A typical feature is the emerging trend of the ability of cars to run on their batteries for some few seconds before fuel is sucked into the engine.

Mileage, as wikipedia simply puts "is literally a distance measured in miles" but is also a term widely used in the automobile industry to describe the fuel efficiency of a vehicle, measured in miles per gallon (mpg). Even though we are use to liters and kilometers than miles and gallons, the L/100km measurement does not really go down well with me. Just know that 1 mile = 1.6 km and 1 gallon = 3.8 liters (to 1 d.p.).

Readers should please note that this list is just to serve as a guide in a car purchase decision. Cars which made the cut on my list were selected based on its price (relatively cheaper), it's presence in Ghana and most importantly, its average mpg. To check for the prices of each of these vehicles in Ghana, you can visit Google Trader.

The Honda Accord Series has been one of the best selling cars in the US, and that to me means a lot. That aint the reason why it made the cut anyway, but this car is one of the most fuel efficient in Ghana. It flexes with a wide rage of engines, but i fancy the 2007 2.4L engine model. It has an amazing 28mpg for a sedan. It also comes with some cool features of which my favorite is its ABS brakes.

This is a car i have personally driven, even though the experience wasn't on a highway, i still relished its durability. Steering was awesome and its responds to rough road wasn't bad for a saloon. Am talking about the 2012 model which also boasts with a 2.5L engine and a staggering 30mpg under it's fuel economy sleeve. Guys, this is a ride with a 6-speed automatic overdrive, and trust me, i aint a fun of automatic cars but i fell for it.

At my number eight is this cutie. The 2011 model is just sweet. I give it feminine descriptions because it just fits! The engine is a 1.8L 140 @ 6300 RPM horse power. It doesn't suck fuel too; an awesome 32mpg. If you manage to secure one of this for your girlfriend, she'll love you for the rest of her life ( I dey joke oo). 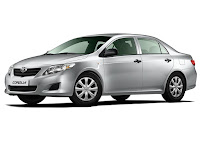 This is arguably the most famous car in Ghana, even though the Pontiac Vibe is almost everywhere these days. Corolla is awesome guys, we must be frank. Most people use to associate it with sakawa but hey, grab a Toyota Corolla and you will understand why it's so popular in the country. I personally dislike its rims, but the engine is awesome. The 2013 model has a 34mpg on the average for both highway and city and that is fuel efficiency!

The South Korean owned India-built small boy is also famous on our streets. It's "cheap" but its features will surprise many who underrate the little hatchback. Key Active features comprise 14-inch steel wheels (with full-size spare), stability control, six airbags, Bluetooth with streaming, USB input and iPod connectivity, electrically adjustable and folding side mirrors, electric windows and trip computer. A 1.4L engine is one of the lowest in my list, with up to a 40mpg. Just make sure you don't over speed with this boy, he's very light, a justification for its dominance in the taxi industry.

Another masterpiece from the South Korean manufacturers. A 1.4L engine, with a 6-speed manual overdrive. For me all manual cars are my friends. This car is also fuel efficient but it places 5th because of its price. It has a staggering 38mpg and that is truly fuel efficient. I just won't personally buy this because it doesn't have a navigation system, apart from that, beautiful and economic!

I was one of the people who just didn't like German cars because of the perception some of us grew up with, that they are fuel suckers. But that is very fallacious. Silver star has some fuel efficient cars and VW actually has the world's most efficient car under its sleeves (click here to check it out VW XL1). The Jetta made the cut that high on my list because it simply deserves to. Absolutely classy. I wouldn't talk about features, because they are awesome. A 2.0L engine with an amazing 40mpg. That's what i call "an economic beast."

Oseeeyyy Yaris...!!! Meehhnn! Look, buy a Yaris, and if you don't like it, bring it to me! The Yaris is class and control plus elegance minus fuel sucking. This hatchback clocks over 41mpg with it's 1.5L engine. One of it's safety features is its stability control. Simply awesome.

Rare on the streets, but many own it. I was a passenger once in it and i must say that it's interior design is truly "Ford." Give this toy a gallon of fuel on a highway and you are sure to clock an average of 42 miles, that's just too sweet. Interestingly, its not that expensive too for a Ford. Be sure that the sunroof will help you stay under our scorching with a very favorable temperature within even with the AC off.

The Kia Rio wins meehhnn, hands down! Am talking about the Kia Rio 1.1 CRDi, nicknamed EcoDynamic. The name more than fits, if this boy can clock over 88 miles with just a gallon of fuel on a highway. This is the Usain Bolt on my list, giving the others a very wide gap. This is a 2013 made and be sure of it's scarcity around, but one director i know cruises this Rio and i just love its alloy rims, very cute.

If you know of a car which didn't make my top ten, please don't hesitate to share with us by leaving a comment. Thanks for reading.