Astonishing events? Visit Ghana. This is the only country in the world, whose economy eats fufu with ivory chopsticks, and calls a $1,000 apartment the burj al-arab. We have come very far with miraculous events in 2014, with the Cedi winning gold medals and breaking records in "skiing". A post on the Cedi will come tomorrow, but today ... we are fishing for bulls! 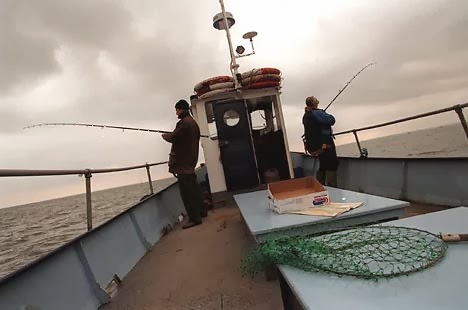 I would not even attempt to explain this, but if i were a fisherman and a net i did cast at sea over three hours catches a bull, I will gallop a million times faster than the rate at which the value of the cedi has fallen against the dollar over the past two weeks. And this is not even the first of such phenomenon. A group of fishermen also did catch deer at see! This is extremely healthy for the economy ... a miracle is what this economy needs, and such miracles are so much needed in the Cedi's performance against the dollar.

Don't be surprised to read reports about a farmer who planted maize only to reap a gympie-gympie. If you are a Ghanaian, you shouldn't really be wowed at some of these reports, because the economy itself is a miraculous one. For example, this economy brags of its ability to melt ice in below 0 degree temperatures with ice! If our fishermen can catch bulls at sea, I believe the economy can shoot rodents in the sky. Have faith ladies and gentlemen.
Posted by Unknown at 09:34
Labels: cow at sea, fishermen catch cow, sacrificial cow found at sea